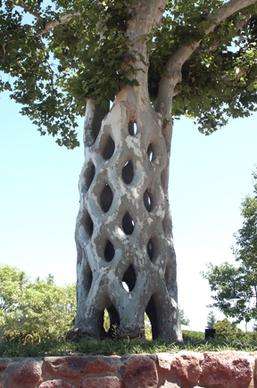 Basket Tree for About Twisted Kiss

My ideas about Twisted Kiss originated with a 60 Minutes story about the Circus Trees of Santa Cruz, California. Farmer Axel Erlandson began shaping trees around 1925, for his own pleasure. He bought land near Santa Cruz in 1945 and created more trees with the goal of establishing an attraction for tourists.

Erlandson used a method generally known as inosculation. Osculate is Latin for kiss. Inosculation occurs naturally where woody plants touch. They can slowly grow together, sharing sap and nutrients. To this natural process Erlandson added his own knowledge of how plants grow. He developed many unique methods which he kept secret.

What began as a hobby soon became a thriving business. He fully realized his dream of entertaining tourists. His creativity came out in the fantastic shapes he created using trees commonly grown in California.

What attracted me was the slow and methodical nature of the process. It seemed like an occupation that could be particularly healing for anyone with deep and dark secrets. That was the beginning of the story “Twisted Kiss”.

As I considered the story, I thought of possible conflicts to drive the narrative. One idea was to say something about what can happen to soldiers. I’ve read so much about PTSD and we now have many more stories directly from veterans. Tilon’s trauma experience is based not on any real event, but rather on an impression of the terrorist attacks that happen far too often all around the world.

I am often struck by how long audio triggers persist for many veterans. A dropped dish or a slammed door signifies an imminent threat and can send a former soldier into a dangerous state of high readiness. Many say they fear what they might do to those nearby before common sense overrides the fear response.

What follows reveals some of the details of the original story. If you haven’t already read Twisted Kiss, go here to read it first.

Tilon has some of that sensitivity to loud noises. Mori recognizes and accommodates her condition, giving her the time she needs to slowly adjust to a normal, non-threatening world. Even so, she doesn’t truly heal until she meets someone who accepts her unconditionally and helps her get the help she needs.

I chose not to reveal Mori’s dark secret because I thought it added a bit of tragedy to the ending. It also gave Tilon the opportunity to get past her obsession with Mori’s past and focus instead on the good times she shared with him.

Photo Credit: Basket Tree photo by Richard Reames. It depicts a sycamore tree grown by Axel Erlandson. The tree is located in Gilroy Gardens in Gilroy, California. The photo is used under the Creative Commons Share Alike license.

This post is about Twisted Kiss, a Science Fiction short story by Ray N. Franklin.